Why Do You Want To Tell Your Story on VETS-TALK?

Want to rebrand yourself?

Need a virtual presence to enhance your profile?

Would you like to have potential employers or team members learn something significant about you
that cannot be found on the four corners of a resume?

VETS-TALK is a forum for veterans to tell a story about themselves, or a life lesson learned, or a great
anecdote experienced.

The VETS-TALK team will help you shape your story in a four to seven-minute vignette that will be
available on YouTube.

Cendric, a female command Sergeant Major with a forward deployed unit in Afghanistan…

Ray, who enlisted after high school when a judge saw potential in a young man from inner-city Chicago…
and retired as a Major after 27 years of Army service…

Chace, who served in the Navy as a Cryptologic Warfare officer…

Tara, who relates getting the chicken pox in boot camp!

Jarrad, who worked for the Southern Poverty Law Center and enlisted in the Army, deployed as a medic,
was medically retired after being grievously wounded and is now the Director of Outreach for The
Warrior Alliance…

Charlie, a Marine officer with two combat deployments who talks about inclusion and knowing your
people…

Kevin, a Marine officer who was told he would never make it… by Santa Claus!

These are the kind of stories you will find on VETS-TALK. Check out the website at www.vets-talk.com
and look at the STORIES tab. Contact us through the website and let’s get your story on VETS-TALK! 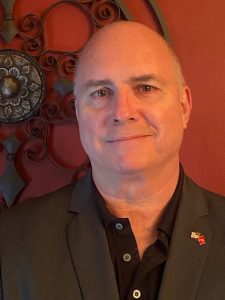 He is a member of the New Jersey and District of Columbia bar (inactive).  Retired February 2017.

Kevin is currently a mentor for both ACP and Hire Heroes USA, a member of the American Legion, Knights of Columbus, and former VP and board member of the CAC of Sandy Springs/Dunwoody.

Kevin is an author, blogger, and podcaster.  Early member of VETLANTA, he serves on its board as the Operations Director.  Kevin is a co-founder of VETS-TALK.

Married for over 38 years to Maureen with four adult children and four grandchildren.  One son, Dan, served as an F18E pilot, Top Gun Instructor, and US Navy Lieutenant Commander.

Kevin is promoting his newest novel, A Face on the Flag, and he will be giving 100% of all presale author royalties to veteran support groups, foundations, and charities for this book.

Kevin has also written two historical novels, The March of the 18th, A Story of Crippled Heroes in the Civil War, and The March of the Orphans and the Battle of Stones River.  For both of those works 50% of his royalties were given to veteran groups.

You can see some of the stories told on our media page https://vetlanta.org/media/