In 2020, the number of U.S. residents who have recently been in prison or jail could fill an entire modern city. The exact number fluctuates, but recent statistical data from the Department of Justice places the total prisoner population from the previous year at no less than two million people. One could argue either way as to the moral validity, or lack thereof, in the U.S. incarceration rate being what it is. However, the fact remains, right or wrong, that millions of Americans find themselves behind bars for their misdeeds and debts to society; and among them are veterans of the U.S. military.

Just like every other demographic in the U.S., veterans constitute a portion of the jail and prison population. Some veterans find themselves serving a short period of time in the prison system for relatively minor offenses, such as getting into a bar fight, or a DUI conviction. Some, indeed, are serving much larger quantities of time for more heinous violations. And, of course, there are veterans in the middle of these two extremes who find themselves in more uncertain circumstances. In some cases, these are veterans who are struggling with alcohol or substance abuse. In other cases, it may be a veteran who lashed out in violence due to the unseen scars garnered while serving in the armed forces. These veterans need an alternative to the traditional justice system, as they have unique underlying problems causing their behavior, which can only be resolved through trained professionals qualified to help veterans. This is where veterans treatment courts step in.

Veterans treatment courts separate U.S. military veterans from the rest of the general population of criminals, and attempt to solve the underlying issues causing their criminality through evidence-based treatment, supervision, and personal interaction.  These specialty courts give our justice-involved veterans a second chance by providing the chance at restoring their honorable status within our communities, which they have rightfully earned. Furthermore, veterans treatment courts save the American tax payer millions of dollars every year by lowering the incarcerated population.

These specialty courts operate with a full array of staff from every part of the local justice system. The court team is headed up by a judge who, logically, is the leader of the team. Also, on staff are a prosecutor, a public defender, a VA liaison, a treatment team, a probation officer, a law enforcement officer, and a program coordinator to hold it all together. Most veterans treatment courts are no less than 18 months in duration, and require more supervision than a typical person on probation would receive. Among the requirements of participants in veterans treatment courts are mandated treatment through counseling, curfews, sobriety, and gainful employment or full-time enrollment in school.

Veterans treatment courts are now all across the state of Georgia, and the nation as a whole. If you feel that you have a good referral for this type of program, please look up your local courthouse’s contact information and reach out. Referrals are always welcome from any source, as our veterans treatment courts want to help every veteran they can within their respective communities, and at large.

Bio: Residing in Athens, GA, Brown James is a current member of the United States Coast Guard Reserves, and a graduate of the Citadel, the Military College of South Carolina. Brown studied at the University of North Carolina’s School of Media and Journalism where he obtained his master’s degree in mass communication, and is now the Piedmont Judicial Circuit Veterans Treatment Court Coordinator. With a background in political campaigning, Brown also serves as the Media Relations Manager for VETLANTA.

Brown was deployed before we published this blog, and we asked Dan Solla, VETLANTA’s Veterans Justice Program Manager to add any recent updates.

The Veterans Treatment Courts across the state never really stopped in the time of Corona. Most transitioned the best they could on to Zoom, while others have been back to meeting in person for months. The Veterans POD in Gwinnett still has about 40+ incarcerated veterans (relatively similar to Pre-Covid numbers). We do a program inside the jail every Thursday and they have been allowing us back in since August.

I think this is incredibly important, that people know that jails and prisons have replaced behavioral healthcare facilities in this country and are filling up with veterans at an alarming rate. DUIs, Drug addiction, and unregulated violence arguably due to PTSD and other adjustment disorders have led a large number of veterans into courts, prisons, and jails. In fact, I would say that out of the 30 combat veterans I have sent to our treatment center in the last year, about 20 of them were facing some sort of criminal charge or on probation. I think the number is a lot higher than most would think. An important read I think for many who are unfamiliar with the issue. 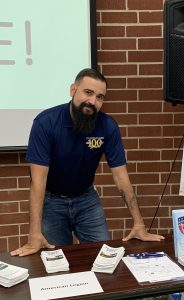 [vc_row][vc_column][vc_column_text]first published on LinkedIn 09 DEC 2020 here: https://www.linkedin.com/pulse/social-security-disability-insurance-ssdi-veterans-va-phillips/ Here is an overview of the White Paper (read the entire White Paper below): Overview: This White…

[vc_row][vc_column][vc_column_text] written by Cherrie L. Davis, ACC, SPHR, SHRM-SCP As the global pandemic continues, teams are finding themselves reaching out to global networks to meet…

Please confirm you want to block this member.

You will no longer be able to:

Please note: This action will also remove this member from your connections and send a report to the site admin. Please allow a few minutes for this process to complete.

You have already reported this .